We’re going to start off with our Belmont Library. We started this actually the previous year (2015) and finished up in 2016 with the help of the county. It is now totally accessible . . . and this enables us to continue on a great library . . . and if Belmont is lucky enough to get a school, it certainly is going to help them.
With our Lynhurst projects, engineering is finished and it’s mainly to do storm drainage and new roads. The roads are in terrible shape in that particular area, this is the old Lynhurst. We had hoped we were going to be doing it starting the construction this year, but after going through budget and reviewing our priorities, and we know this is going to be a three-year project, we decided we needed to do some other things because of health and safety . . . so the tenders will go out hopefully in the fall so they can start construction early January in 2018.
This is a big thing we’re doing and has to do with healthy communities. That’s our Master Trail Plan. We’ve asked people to send in their requests, information and their ideas on how we can improve our trails throughout the municipality.  Now for Central Elgin, that means anywhere from Belmont, heading all around St. Thomas, heading south through Union and Sparta and ending up in Port Stanley.
So there are a lot of trails we can work on. Some of that will be in conjunction with the county in so far as creating  bike paths. For example, on Dexter Line part of that is done, and East Road in Port Stanley is another road that is to be done by the county this year and it will have bike paths along the side of the road. And that’s also for pedestrians.
With the new developments going on up there, that’s going to help connect and that’s what it’s all about, connecting our communities. Even Belmont, it’s a divide between north and south and this is going to help us connect.
Sparta historic lighting . . . we’re going to do this in conjunction with the county. When Sparta Line, going into Sparta, is re-done, which is now I believe scheduled for 2018, that is when our new lighting will go in there. And it will be recognized in the historic parts of Sparta.
This is probably one of the more exciting things to happen in Central Elgin this year, the Hawk Cliff (Thames) Talbot Land Trust. Hawk Cliff Farms sold (a parcel of land) to the (Thames) Talbot Land Trust to ensure this area is protected forever . . . they’re going to have some trails through there to help people enjoy nature.

Central Elgin got involved where we helped them with zoning issues, we helped supply vehicles to haul away garbage. A lot of stuff was being dumped in the ravines and other areas. Some of our staff went down to help with the clean up, volunteering their own time. We also created a parking lot . . . it’s a grassy area and certainly allows people to go down there and enjoy without cluttering up the road itself.
So now we’re in to some of our new subdivisions. In Belmont we just approved another subdivision to move forward . . . so there’s another 40 lots in Belmont.  We also know there is another subdivision that is ready to go and I think, again, if Belmont was to get that school, that subdivision would take off.
Just north of St. Thomas in the Lynhurst area, Prespa has a development going on there, condominiums. They had to wait for approvals for sewage.
When we get south of St. Thomas, we have a lot of development areas. Some have already started and some will be in the next year.
In the Union area, it’s a secondary growth area and there’s land there zoned and ready to go as well. Obviously some things have to happen, such as such as providing utilities such as sewage. But that is doable.
In Port Stanley, there are several new developments going on. We have Sunset Bluffs, which is a Donwest Development. Little Creek is starting their next phase. Right next to the golf course in Port Stanley, it was the Walker Farm, it is owned by Kettle Creek Golf & Country Club. It’s in sod right now but that’s going to be coming forward for some new homes.
And what was a farm over on George Street, there is another developer who is going to be moving forward on that. Wastell Homes, they were named London’s top builder last year.
And this was designed to promote Sunset Bluff, when you get right down to it, it helps us promote the entire area. This is what we call our rolling billboard. We entered into a partnership with Donwest, Messenger Freight Systems and the BIA in Port Stanley. I believe there are eight trailers that travel to the GTHA every single day and we’ve had phenomenal success with this. Talking with Donwest (Custom Homes), they’re getting calls every day where people are stuck in traffic and they just happen to be parked next to this trailer which has their phone number and they’re calling to say where are you?
So, yes it is promoting Sunset Bluffs but it promotes the entire area and it’s a very good example of how partnerships work for everybody.
Next up is our harbour secondary plan. We’ve just hired our consultants and we’ve had our first meeting with them, the steering committee. From there, the technical committee is going to start working on this.

Everybody has been asking, you’ve had the harbour for six years, what are you going to do with it? Well, if you’ve been down to Port Stanley you will have seen quite a bit has happened.
We bought the J.R. Richardson property, that’s where the silos were. That’s already been cleared off and we’ve done some preliminary environmental studies on that.
Lakes Terminals, where the huts were, we’ve done environmental studies on that as well. So there is between 10 and 12 acres of land there on the west side of the harbour that we can develop now. 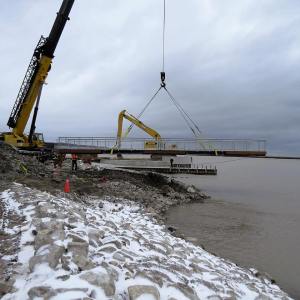 But before we do that, we need to get that secondary plan. When we did our official plan, we specifically left this area out so we could design exactly what we want there. Is it going to be residential, is it going to be commercial or a combination thereof? Is it going to be a recreational area?
Certainly we are always going to protect the waterfront itself. I think that’s our priority. And there will always be public access. But what about the rest of it?
So about 10 to 12 acres on the one side that was not connected to the divesture, but it’s right up against the divesture land. And on the other side, there’s about 25 acres of bare land the federal government has been working on doing the cleanup. There have been some issues with that and they have removed a lot of the contaminated soil. There is ongoing monitoring of those lands.
But, when that’s all done it will be clean to parkland standards, which is the highest standard you can have. It means we are going to be able to develop that into whatever we want. And again, that get’s back to this secondary plan.
We have members of council, we have staff on there, we have citizens from various organizations and citizens at large working on the steering committee. And over the next year, we will develop what we are going to be putting down there. And once we do that, we’re going to go out and see who wants to build down there, using our vision.
And that’s the great thing, we are in total control of this.
We also took a look at our sewage capacity in Port Stanley and we are fine. We are within our certificate. But we are looking long term. If we are going to have these developments over the next few years, we better be prepared. So it’s sort of chicken and egg, which comes first. We decided the sewage upgrades needed to happen. We’re going to have a brand new building with a pumping station there.
In conjunction with the county, we’re going to have space for a permanent tourist booth there, something we’ve never had. Also public washrooms and a storage area for the unit our firemen use for the beach rescue. And of course all the landscaping that goes around there. The location is a little south and west of the lift bridge, part of what people would know as the Legion parking lot.
And that, in conjunction with the sewage upgrades at our lagoon, which is in Southwold, that is to be done this year. That’s over a $15 million dollar project. Probably the largest project we have ever taken on in Central Elgin.
And that does not hit the tax base as much as it’s hitting the water/wastewater rates.
The other thing we’re doing is a new firehall. Port Stanley is in dire need – and this is a health and safety issue really- of a new fire hall. As well, where the existing fire hall is now, when the volunteer fireman show up and it’s the summer time, they have no place to park their vehicles.
So, we have started that project and we’ll be going out for RFPs (request for proposals) on a design-build. And that is a two to two-and-a-half million dollar project. And it has to be built to post-disaster (standards).
And then we get into Hofhuis Park. Everyone keeps saying, “When are you going to open Hofhuis Park?” Well, as soon as we stop sinking.

Hofhuis Park was created by dredging of the harbour land. It was a very good way of handling the dredging, instead of hauling it out into the lake, we have created a new park. Between five and six acres, roughly. Our intent would be to have the park itself open this year, however there won’t be any structures or anything like that. There could be some landscaping taking place.
Part of that secondary plan is to look at the design of Hofhuis Park.
And, of course, this is right along our brand new pier. Last year, when we opened that up, there were at least a thousand people there and it never stopped all day long. And it hasn’t stopped since.

There isn’t a day, even in the winter time, that there isn’t someone walking on that pier. And, in Port Stanley, to have tourists coming in the winter time, was unheard of. Now they are coming. That creates a better economy for the businesses and it’s going to bring other businesses into town and that can only be good for Central Elgin and the tax base. And good for the entire county.
There’s one more structure going up and it’s a boathouse, and that’s where our rescue boat will be stored.
We have been working hard, and we have set our budget. Our budget for 2017, our tax rate actually went down by .11, however overall our budget increased by 2.47 per cent, which meant it really went up to cover inflationary costs and it’s going to allow us to make a lot of improvements to a lot of various roads and a lot of other infrastructure, including some parks, such as Turvey Park in Lynhurst.
We’re happy with this 2.47 per cent. We had some good, healthy debate and that’s a good thing when you can sit around the table and have a healthy debate, vote on it and move forward. I think that’s a positive thing for us all.
Questions and comments may be emailed to: City Scope