At one time it appeared to have stalled in its tracks and now a hospice to serve the residents of St. Thomas and Elgin has been given a guarantee of moving forward to completion.
The push began in 2002 with a fundraising concert for Serenity House Hospice, featuring Canada’s singing priest, Rev. Mark Curtis.
Thursday afternoon (Dec. 20) at the CASO station in St. Thomas, MPP Jeff Yurek announced he has received a letter from the province’s health minister supporting a six-bed facility and encouraging the hospice planning committee to submit a capital program application.
“After strongly advocating for a hospice in my riding, I am thrilled to receive a letter from Christine Elliott,” advised Yurek in a media release.
In the letter, Elliott stressed, “Building new hospice beds across Ontario will provide people with end-of-life care and support in a more comfortable setting.”

That was the goal of Peggy Gillespie and Linda Corriveau 16 years ago when they formed a steering committee for Serenity House, a facility that would provide a home-like setting for those individuals living with or dying from a terminal illness.
“We will provide supportive care to our clients and their families,” noted Corriveau at the time, “showing them trust, compassion and respect.” 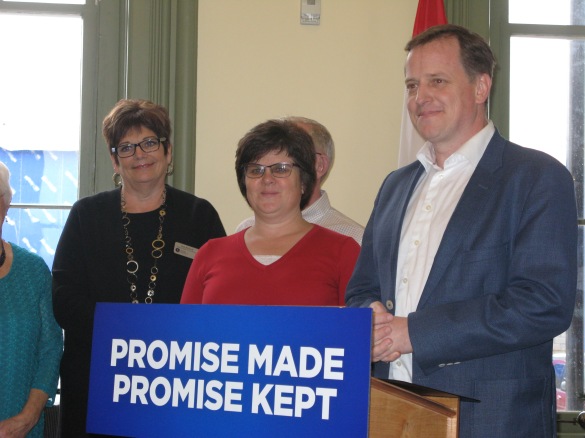 At Thursday’s announcement, Yurek observed “The need is here for our community. I think every other region in southwestern Ontario has a hospice but Elgin county.”
He continued, “I’m pleased to announce the path to an Elgin hospice has been cleared of obstacles. Those have been removed.”
When questioned as to whether Elliott’s letter was an iron-clad guarantee a hospice would be coming to Elgin, Yurek was firm in his response.
“I can guarantee there will be a hospice in Elgin county . . . during my term.”
No location has been determined for the hospice and many factors – including the purchase of land, if necessary – have to be considered before determining the cost of a facility for St. Thomas and Elgin.
Laura Sherwood, co-chair of the Elgin Residential Hospice Committee, noted “Hopefully we will be able to refine what those numbers might look like and we will definitely be sharing that with the community because, without a doubt, we will need the support of the community to help bring this vision to a reality in Elgin.”
Yurek indicated, for a six-bed facility, the province would financially contribute “close to a million dollars” in capital funding and “usually it’s about 60 per cent” of operating costs.”
“The rest would be fundraised throughout the community,” continued Yurek. “I don’t see that as a barrier. People are waiting to give and donate to get this going. They were just waiting for some sort of signal from the government that they should proceed.”
Yurek is hopeful ground can be broken for the hospice “in the next year or year-and-a-half.”

Out from under the covers, the need for hospice care beds in St. Thomas/Elgin

With an eye to future development growth, the city announced Thursday (Dec. 20) the purchase of just over 54 acres of land for expansion of the Highbury Industrial Park.

The purchase price for the property – located near the intersection of Highbury Avenue and Edgeware Road – is $3.3 million and involved a partnership between the St. Thomas Economic Development Corporation and the city.
The land purchase is a first step in fulfilling a recommendation of an employment lands review presented to city council at a reference committee meeting in November of last year.
The study noted the city will require close to 350 acres to accommodate employment growth through to the year 2037.
It further recommended a proactive approach to land development and cooperation with neighbouring municipalities.
Municipal services exist close to the site and city staff will be implementing an engineering analysis to ensure those services are readily available to meet future client needs.
“We will probably look to maintain it as big blocks of land if we can,” advises city manager Wendell Graves.
“We want it to be as flexible as it can be so we can attract whatever clients. We want it to be client driven. It has been a long time since we have bought some industrial land.”
In a media release, St. Thomas Economic Development Corporation CEO Sean Dyke notes, “The city has seen a great deal of interest in the existing industrial lands, with the premier location just a short drive to Highway 401, in the heart of Canada’s industrial heartland, which has been a critical factor for the development of lands and buildings in the region.”

Thursday’s surprise announcement that MPP Jeff Yurek is offering a guarantee a hospice will be built to serve St. Thomas and Elgin generated considerable joyous feedback on the City Scope Facebook page.
No need to wonder about Peggy Rattray Gillespie’s reaction as she wrote, “Woot Woot. It’s been a long time coming but we are so encouraged to see this through. Thank you for all the hard work, dedication and support we’ve received through the years to get here thus far.”
Which prompted Debbie Rattray to respond with, “Awesome news Peggy, dreams do come true, for you and the community.”
It’s congratulations all around, writes Donna Lunn. “Congratulations to all the volunteers, Board members and staff who have worked hard for this vision over the many years… everyone’s contribution was essential to this day. Every person’s commitment and dedication is what has made this dream come to fruition.”
Jo M Ratt chipped in with, “Finally yours and Linda’s vision will be attained.”
Angela Valters Weaver enthused, “I am so proud of you all! You did it. Your hard work is paying off.”
And Rebecca Bonner Margeson kept it simple, “Congrats Peggy so proud of you.”
It was a different tone following last week’s posting which revealed Coun. Lori Baldwin-Sands intends to, once again, seek the Liberal nomination in Elgin-Middlesex-London in next year’s federal vote.
Susan Gerry writes, “Again, it takes nerve to run for a City Council seat, then take off for better pastures. I guess Ms Baldwin-Sands will again be the wannabe senior official after the next Fed election. Pretty hard to vote for a semi-professional flip-flopper. Or does that make her experienced flip-flopper?”
Dave Mathers emailed to stress the time has come to get on with the Alma College property development.
“Regarding the latest Alma meeting story, it should be pointed out that the ‘shadowing’ problem affecting 9 McIntyre St. apparently only occurs for a very brief period in December. (Dawn) Doty’s complaint is that the ‘shadowing’ will prevent the ice from melting on the roof. This is not really a valid reason to delay a multi-million dollar much-needed development. As for (Sue) Fortin-Smith, she has made it VERY clear she will do anything to stop the project. This, in my opinion, is a very hateful position to take. She appears to prefer to leave the land in the current desecrated condition! Sad.”

After an exchange of shocking allegations this past summer – none of which have been proven in court – it has been all quiet on the St. Thomas Early Learning Centre front.
To recap, earlier this year the city undertook a third-party audit into the allocation of wage enhancement payments to childcare operators under its jurisdiction.
Following release of the audit results, we communicated with former executive director Patricia Riddell-Laemers and her legal counsel who advised they would be undertaking legal action against the centre, based on a number of allegations including a claim by Riddell-Laemers she was sexually assaulted by a member of the St. Thomas Police Service who was on the centre’s board of directors.
Riddell-Laemers employment was terminated in February of this year with an internal investigation undertaken to determine whether the termination was with or without cause. In April, she was informed the termination was with cause.
The allegations against her – again none have been addressed in court – included failure  to obtain proper approvals from the Ministry of Education prior to demolishing a wall in one of the facilities; improperly disbursed wage enhancement funds; use of centre credit cards for personal expenses; harassment and bullying of staff; and intimate interactions in the office which were overheard by staff.
In a conversation yesterday (Dec. 21) with Elizabeth Traynor, legal counsel for the St. Thomas Early Learning Centres, we queried the likelihood of this matter wending its way through the courts.
She responded, “I have no reason to think that it won’t at this point.”
Traynor added, to date, no preliminary court dates have been set.
Plenty of interest in these proceedings and as details are made available they will be posted here.

OUR CHRISTMAS WISH TO YOU

As has been the custom for some time now, we offer these last-minute – but appropriate throughout the year – gift suggestions to distribute in the appropriate fashion.
To your enemy, forgiveness. To an opponent, tolerance. To a friend, your heart. To a customer, service. To all, charity. To every child, a good example. To yourself, respect.
And, to all faithful City Scope readers, in particular, those with birthdays at this time of year – when your special day too often is lost in the hustle and bustle that is the lead-up to the day itself – may this Christmas bring you peace, health and happiness.
And, as always, you are more than welcome to wish this corner a Merry Christmas.

3 thoughts on “Canada’s singing priest got the ball rolling, now the province’s health minister is singing the praises of a hospice for St. Thomas/Elgin”