The undertaking has been characterized as “a once in 100-year opportunity to create something inspiring.”
The project in question is the new, graceful Dalewood Bridge replacing the Bailey bridge installed at Dalewood Dam as a temporary structure in 1983 at a cost of $35,000.
That long-in-the-tooth span was finally deemed unsafe in November of 2017 and closed permanently, forcing many city residents to alter their travel patterns.
In a report to council in December of the previous year, the city’s manager of capital works David Jackson noted, “Bridges remain visible pieces of the community for over 100 years. With some creative design and cost effective engineering they can become icons that contribute towards community identity.”
And, that is exactly what is now spanning the water at Dalewood Dam.

The two-lane structure of a brilliant white, cable-stayed design features a multi-use path at a cost of $5.1 million. 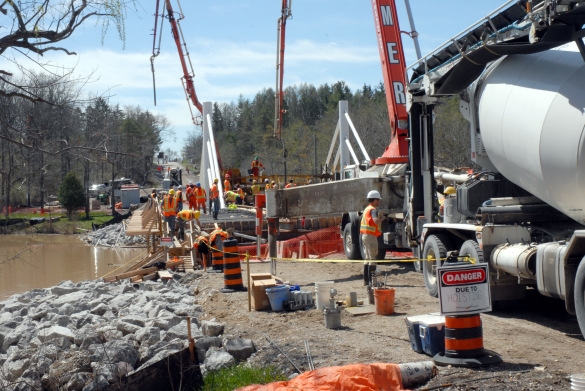 The project has involved removal of the existing structure; replacement of the roadway from Woodworth Crescent to Water Tower Line; construction of the new bridge; improvements to the storm drainage system; road, curb, and sidewalk on the east side of the roadway; habitat enhancements; and landscaping/tree planting.
McLean Taylor Construction Limited of St. Marys was the low bidder on the replacement bridge tender. The firm worked on the Sunset Drive bridge rehabilitation project in 2015. 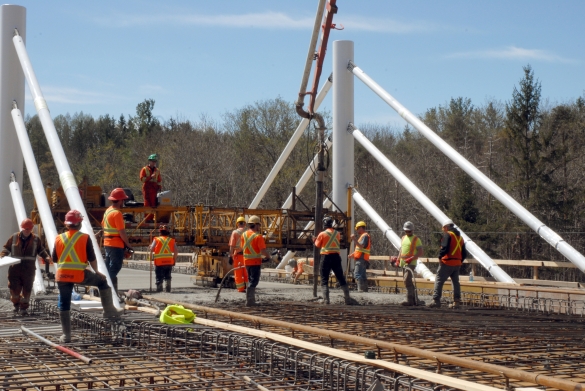 It was literally all hands on deck Thursday (May 2) as concrete was poured throughout the day to complete the bridge platform. That meant workers grabbed pizza and drinks when they could as the plan was to complete the decking by three in the afternoon.
The concrete will take about 28 days to cure and city manager Wendell Graves, in a conversation yesterday (May 3) advised, “We’re still aiming to hopefully have it done by the end of June. We’re in good shape, I think.”
At that same council meeting in 2016, Jackson pointed out “There are many examples of iconic bridges that define communities in large cities but also smaller examples like the stone bridge in Stratford, Blackfriars in London, or the Humber pedestrian bridge in Toronto.”
This summer it will be possible to add Dalewood Bridge in St. Thomas to that list.

They have been called unsung heroes for getting hundreds of thousands of children to and from school safely.
And now, with proposed legislation unveiled last week in London, those drivers
may have an additional tool to increase school bus safety.
On April 26, at the Langs Bus Lines’ yard, Minister of Transportation Jeff Yurek outlined the new measures that will give municipalities the muscle to target drivers who blow by school buses while their lights are flashing.

“We’re moving forward with legislation to allow evidence from stop-arm cameras on school buses to stand alone in court,” advised Yurek.
“That means there is no requirement for an additional witness (typically the school bus driver).”
In addition, there would be new monetary penalties which, in combination with the bus-mounted cameras, allows for more efficient enforcement and prosecution, according to Yurek.
Specifically, the province is proposing a new “administrative monetary penalty framework” that gives municipalities the tools they need to target drivers who blow-by school buses.
The current fine is $400.
“If passed, we will put in place an option for municipalities to target drivers who threaten the safety of children through monetary penalties without wasting time and money in court,” added Yurek.
Once the infraction is caught on the stop-arm camera, the school bus driver would not have to take a day off work to testify.

And, municipalities will have the option of utilizing their own tribunals and have the offending motorist pay the fine or fight the charge without having to go through the court system.
The fines collected will stay in the municipalities, advised Yurek. The money would go to the school bus operators to pay off the investment in the cameras, at no cost to taxpayers.
The cameras run up to $2,000 each, plus the cost of the software.
Yurek indicated more than 830,000 students travel by school bus every day in the province and the cameras are in use in pilot projects in Ottawa, Kitchener-Waterloo, Sudbury, Brantford, Peel and North Bay.
“This proactive announcement will benefit our drivers and focus on the care and control of the students we deliver to and from school each and every day,” stressed Rob Murphy, president of the Independent School Bus Operator Association.

“This is going to take a lot of pressure off our drivers, because instead of them having to watch for vehicles coming and going – as they still will – their first and foremost concern will be getting the children on and off the school buses safely and, if need be, across the road.”

He is also the owner of Murphy Bus Lines, which operates over 300 buses in southwestern Ontario. The family-run firm began operations out of Clinton in 1946.
Murphy noted there are in excess of 1,000 school buses running in the region and stressed, “This proactive announcement will benefit our drivers and focus on the care and control of the students we deliver to and from school each and every day.”
Chatham-Kent-Leamington MPP Rick Nicholls praised school bus drivers as “our unsung heroes. They are the ones who ensure our children get to school safely and get home safely.
“This is going to take a lot of pressure off our drivers, because instead of them having to watch for vehicles coming and going – as they still will – their first and foremost concern will be getting the children on and off the school buses safely and, if need be, across the road.”
Nicholls was a strong voice on school bus safety when the PC party sat in opposition.
Speaking after the announcement in London, Yurek indicated the legislation will be introduced at Queen’s Park “in the next few weeks,” with the aim of having it in place this September.
“We know these measures will hold irresponsible drivers accountable,” advised Yurek.
“The school bus operators are just waiting to put the cameras on buses. They believe wholeheartedly in the safety of the children riding their buses and they have been asking for this for years.”

Their new headquarters on CASO Crossing not only houses the city’s police service, if approved by council on Monday (May 6), the station will be home to the Primary 911 Answering service.
Currently, in a joint agreement, the city and Elgin county use the services of a company known as Northern 911 in Sudbury. When a 911 call is initiated, an operator in that city directs it back to the local dispatch centre, whether that be police, fire or ambulance.
Cost of the service is approximately $18,000.
The contract expires at the end of the year and, in a report to council, city manager

“It’s not a huge savings, but when that call is picked up here in the city instead of Sudbury, it just adds those important, incremental pieces of time to the whole mix.”

Wendell Graves is recommending the answering system be housed within the communications centre at police headquarters.
“In consultation with the police services, there is capacity to have that come in,” confirmed Graves in a phone conversation yesterday (May 3).
In addition, the city will not enter into a new joint agreement with Elgin county.
“I don’t know what the future holds there,” Graves indicated, “but we need to, on our side, make sure the system is up and running and then everybody can sit down and have a chat about what the next steps might be.”
As outlined in his report, Graves notes “Locating the 911 calls at the St. Thomas Police Service has the potential of providing a quicker response to an emergency and the ability to holistically manage a given situation immediately when it is identified.”
He pegs the cost of handling 911 calls locally at about $15,000.
“It’s not a huge savings,” added Graves “but when that call is picked up here in the city instead of Sudbury, it just adds those important, incremental pieces of time to the whole mix.”

Our item last week on potential uses for the Wellington Block generated feedback on several fronts.
Via email, D. McCarthy had several suggestions and a key question.

“Do an RFP (request for proposal) to rental operators for all market rate apts.
Have a professional rental company manage it. If the city population wants to use any of the profits(?) for social housing, go for it but not necessarily at this site. Sometimes we get too ‘groovy’ like chalkboards and such. Design regular apts. If someone wants to decorate the interior strangely, go for it.
Personally, I think some legal types might want to live in an apartment in the courthouse district. It’s a nice area.
“Secondly, didn’t the (Dorothy) Palmer estate donate a chunk to make this an educational site some years ago? Since it’s not continuing that way, do they get their money back. If they did plunk some money in and it didn’t work out, I’d be doubly shy of donating in that way again.”

“Who is going to pay “market driven price” to live in a geared to income property? Lol seriously.”

An imaginative concept emanating out of the St. Thomas Elgin Public Art Centre this week. On Wednesday (May 1), the centre Tweeted, “Have you heard about #WestEndWednesday coming to Downtown St. Thomas this summer?! It’s a great opportunity to get up from your desk and engage with your community at the Public Art Centre, third Wednesday of the month. Bring your lunch between 11:30 and 1:30 Let’s #eattogether.” What a great way to network or learn more about your community and the art centre. First one is coming up May 15 at 301 Talbot Street.