Once every month or so, you’ll find Elizabeth Reavely standing beside the entrance to the laneway leading to the CASO station off Talbot Street.
Sign in hand, she is quietly protesting on behalf of her daughter Claire in the hope of alerting downtown traffic to the plight of autistic children across the province.
The small group of parents usually catch the attention of Elgin-Middlesex-London MPP Jeff Yurek, whose office is at the end of that laneway.
“Jeff comes out and talks to us usually every time and he did hold a round table,” advises Reavely. “But for the most part, his hands are tied.
“He has to toe the party line and it’s too bad. We need the MPs and MPPs to take a step back from their parties and say ‘my constituents need this.'”

It used to be Reavely focussed her attention and frustration in the direction of Premier Doug Ford and the provincial Conservatives.
But now, with the federal election less than two weeks distant, Reavely finds herself facing a new combatant, federal Conservative leader Andrew Scheer. 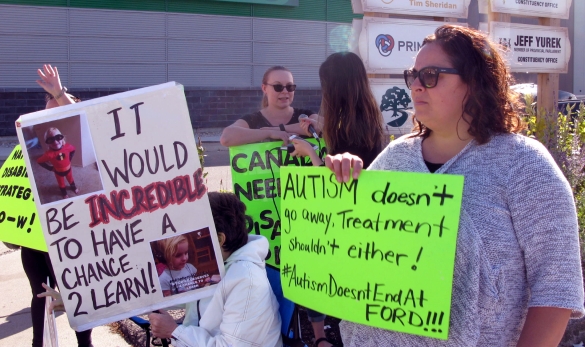 This past week, his party unveiled its National Autism Strategy, should Scheer win favour as prime minister.
A media release revealed, “An initial investment of $50 million over five years would be invested to develop a comprehensive strategy in consultation with autistic individuals, autism organizations, provincial, territorial, and municipal governments, and indigenous communities.
“The National Autism Strategy will be person-centred, include first-person perspectives, will be culturally appropriate, and will reflect the needs of Canada’s northern, rural, and remote communities.”
What appears to be encouraging news for the parents is actually frustrating to Reavely.
“It’s frustrating because we have seen on the federal campaign trail that Mr. Scheer has been quite dismissive of autism parents he has encountered. It is infuriating to be dismissed when we’ve been fighting for so long. Nobody seems to be listening.”
The protest yesterday (Oct. 10) was organized prior to the announcement of a National Autism Strategy, advised Reavely.
“But you look at the wording, it’s $10 million a year for five years to help develop and consult about what is needed. That’s not exactly money in the pockets of families. It’s frustrating we can’t seem to get the services we need. It should be part and parcel of our health plan.”
It’s a similar story provincially, added Reavely. 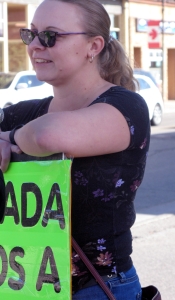 “They (the Ford government) keep giving us extensions of what the current plan is. Apparently, the end is in sight. They are supposed to announce their new plan in November for implementing in April (of next year). There doesn’t seem to be anything long term.”
Back in August, this corner spoke with Lyndsay Collard of CoField Inc., based out of a Talbot Street storefront. She and co-owner Alison Ditchfield head up a team of instructor therapists who provide Intensive Behavioural Intervention (IBI) to children with autism and their families.”
Collard outlined the current situation in the province.
“The way it used to work is there are about 40,000 kids in Ontario . . . up to the age of 18 diagnosed with autism. When the Liberal government was in power, about one-quarter of those kids were receiving government funding and the rest were sitting on a waitlist.”
All that changed with the election of Doug Ford, advised Collard.
“When the Conservatives took power, what they did was say, ‘We’re getting rid of the waitlist and instead of giving 25 per cent of the kids all of the money they need to fund a program, we’re going to give 40,000 kids just a little bit.’”
However, Social Services Minister Todd Smith announced in August which a return to needs-based autism funding.
Is the provincial government now back on course?
“We hope it will,” said Collard. “They announced another six-month extension for all clients who are currently in the system, so that’s good news for our kids.
“So supposedly the committee (the Ontario autism advisory panel) is meeting right now to develop a needs-based system. Which is what it was before. They said by next April it should be up and running.”
Perhaps that will provide some long-term stability and security for Reavely and her six-year-old daughter Claire, who was diagnosed with autism at two-and-a-half years of age.
She waited over a year for services before finally getting them as a candidate for IBI with the private provider, CoField Inc.
CoField – the only centre of its kind in Elgin – has a staff of 10 dealing with 15 clients. In addition to St. Thomas and Elgin county, those clients come from Woodstock, London and Exeter. You can listen to the full interview with Lyndsay Collard here.

“They are phenomenal,” enthused Reavely. “You can tell they care about our kids. Claire started at 25 hours a week and since starting school last fall she has dropped down to 13 hours a week.
“She was primarily non-verbal when we first started. She had a lot of behavioural issues. Since starting therapy it’s new words every day.
Reavely continued, “She is six-and-a-half now and speaking now for the most part. I couldn’t take her into the grocery store for five minutes to buy milk. Now she will go grocery shopping with me and has no issues.”
Claire is a Grade 1 student at Msgr. Morrison Catholic School in St. Thomas.
“She has come a long way. There is huge progress. She is maintaining what is the norm for her age. She is in a regular classroom doing everything her peers are doing.”
As a result of the August announcement by Minister Smith, Reavely and her daughter were given a six-month extension of Claire’s program.
“And then we were given another six-month extension to ride us out until the new program – whatever that looks like – starts.”
But Claire’s program is not a long-term fix.
“The way it was set up before, once her progress starts to even and she is not getting the benefit of the program then we should withdraw from the program.”
Claire’s day-to-day activity has been aligned to a structured routine, advises
Reavely.
“Any disruption to their typical routine and you expect some sort of regression and we expected that over the summer break because she doesn’t have six hours a day of school. She just has three hours a day of therapy. But she didn’t regress and she was still improving on her basic skills.”
Reavely is proud of the fact Claire is handling school well.
“Being in Grade 1 is a big change from kindergarten. You are expected to sit for longer and it’s much more structured. And she still seems to be doing phenomenally well.”

“When we first got the diagnosis we didn’t know what the future would be like. Now looking back it is kind of silly. I don’t think there are going to be any restrictions. She seems to be doing things on her own in her own way.”

Reavely has nothing but praise for the teachers, principal and EAs at Msgr. Morrison.
“Everybody wants to see Claire succeed.”
So, as she acknowledges the honking cars passing along Talbot Street, what would Reavely like to envision in a perfect world.
“I would like to see them incorporate all disabilities and I’d really like to see it covered by OHIP. I would like to see our doctor be able to prescribe ABA – Applied Behavior Analysis, which uses experimented behaviours to stimulate positive behavioural change in a person having significant abnormal behaviour – and have it covered.”
Because the sooner children like Claire get that treatment, the better off they are,” notes Reavely.
“They are more equipped to handle everyday life. We want them to be productive members of society.”
In the meantime, as with any parent of a Grade 1 student, Reavely is thrilled when Claire brings home her drawings from school. 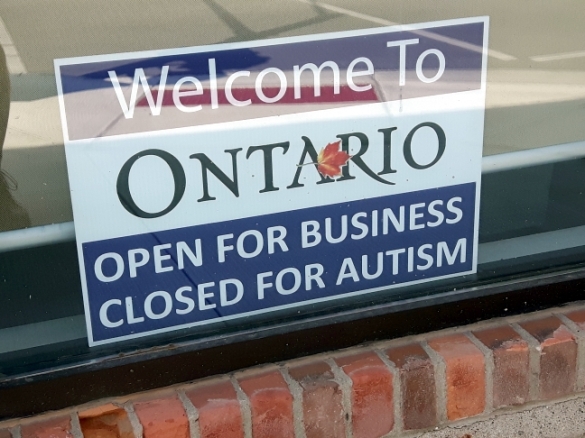 “Her artwork, oh my gosh. Her artwork is absolutely amazing. Her favourite right now is Halloween.”
Is it proudly displayed on the refrigerator door?
“There is no space anymore,” laughs Reavely. “It is amazing to see her progress.”
Her latest piece has been framed and resides in Claire’s bedroom.
“When we first got the diagnosis we didn’t know what the future would be like. Now looking back it is kind of silly. I don’t think there are going to be any restrictions. She seems to be doing things on her own in her own way.”
In the meantime, those marches in front of the laneway leading to the office of MPP Yurek are sure to continue.

Is the city ready for a community centre, complete with an indoor swimming pool?
At Tuesday’s meeting of council, members will hear a deputation from Dan Leonardes, president and Jessica Patterson, secretary of the St. Thomas Jumbo Jets swim team on the need for such a facility.
In a letter to Mayor Joe Preston and city councillors, Leonardes writes, “there is a need for new aquatic and community facilities within the city.”
He continues, “Given the size and demographics for the City of St. Thomas, we are disappointed at how underserved we are as a community.”
The team uses the Family YMCA pool for its events but the facility’s available space for parent and competitive event meetings in inadequate, according to Leonardes.
“We have taken some time to connect with other community members regarding this issue and there is a strong consensus,” he notes. St. Thomas and the surrounding areas need a new aquatic centre.”
That need is supported by a petition to be presented to council Tuesday.
Such a facility has long been on the wish list of Coun. Lori Baldwin-Sands and in the leadup to last fall’s municipal election she stressed the need for a new recreational facility and the expansion of Valleyview Home.
Is the rest of council as eager to take the plunge?

Following up on our coverage this week of the trial of Tarrick Fakira-Martin, charged with injuring an animal, Julie Leeds posted the following on the City Scope Facebook page.

“I usually try and empathize and find redeeming qualities about people but in this case I find none.
“I also tend to be more lenient when it comes to rehabilitation vs. punishment but I feel pretty good stating how I hope this trial ends.
“I hope there is a special Hell for people who abuse animals and children, and I hope he spends a long miserable existence in jail before going to it.”

On the announcement earlier this month on the plan to operate Inn Out of the Cold on a year-round basis, Lori Matthews has the following observation.

“This is great … a small ray of hope for this community. This is definitely a win … but no place to stop and rest. This is infinitely better than bushes and doorways … but WE ARE ALL HUMAN … and WE ALL DESERVE A HOME! Amazing start City of St. Thomas … but it is only a temporary solution. Please keep that in mind moving forward. Inn Out of the Cold ROCKS! But it’s time to rein in the property developers with rent controls…there is a REAL solution.”