Climate crisis marches were again held around the globe yesterday (Sept. 27) including here in St. Thomas.
The province’s Minister of the Environment, Conservation and Parks did not attend any local rallies, as was the case with a rally held last Friday in front of city hall.
Instead, he issued a media release where he noted, “Today, I would like to recognize all the young Ontarians who are making their voices heard on the serious issue of climate change.”
But just how seriously are Conservatives at both the provincial and federal level dealing with the implications of climate change?
At a massive rally in Montreal, federal Conservative leader Andrew Scheer was the only head of a major federal party not in attendance. 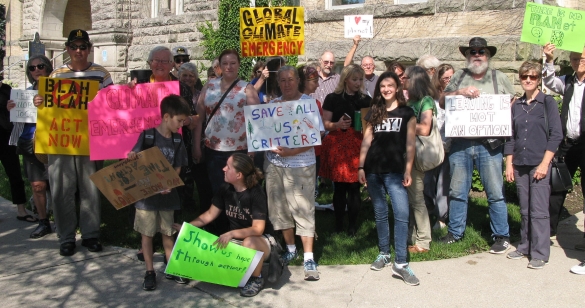 Across Canada the province is, in fact, trailing Nova Scotia and New Brunswick in cutting emissions, based on data from Environment and Climate Change Canada.
Yes, Ontario is down 22 per cent in the period 2005-17, however, Nova Scotia leads the way at 33 per cent while New Brunswick has cut emissions by 28 per cent.
And, most of the emissions reduction in this province can be credited to the Liberal governments of Dalton McGuinty and Kathleen Wynne.
“I would say the coal plant closings was the bulk of that,” agreed Yurek in a conversation yesterday, “and we paid a price for that in our hydro rates. We saw them soar and that was dealing with the cleaner energy grid.”
He continued, “I like to remind people the last Progressive Conservative government closed the first (coal) plant and started the process. The next government continued and shut down all those coal plants which we’re supportive of.”

“Real fundamental, systemic change will not happen unless we hit the streets and make ourselves heard.”

In the media release issued through his office, Yurek advised “We have also proposed beginning to transition to 15 per cent renewable content in gasoline as early as 2025, without increasing prices at the pump.
“The transportation sector is Ontario’s largest source of greenhouse gas emissions and these potential changes could help reduce emissions while continuing to enable economic development and job growth.”
However at last week’s St. Thomas rally, organizer Julie Berry stressed the need to wean ourselves off fossil fuels.
Responding to that Yurek stated, “Right now we are focussing on trying to move to lower carbon-emitting forms of transportation of compressed natural gas for trucking, propane and natural gas for vehicles and, of course, electric vehicles play a role in that as well.
“We believe that industry is starting to change toward lower carbon-emitting vehicles and electric vehicles and we think they will proceed with that.”
Yurek continued, “But our other plan is reducing regulations so that private industry can start building the necessary fuel-charging stations that are needed for natural gas, electric or propane vehicles.”
He indicated the province has been involved in discussions with GM regarding the possibility of producing electric vehicles at its Oshawa plant.
“Our main goal across the province is to make it an investment-friendly province so businesses will want to build and invest in Ontario. We’re hoping changes we are making in lowering the tax rate and decreasing red tape and regulations and creating potential auto zones throughout the province so manufacturers, as they change their building technologies to newer technologies, will consider Ontario as a potential spot to build and create jobs.”
In his release, Yurek concluded, “Our government’s plan is proof that we can balance a healthy environment with a healthy economy. We are committed to taking meaningful action on climate change by implementing effective and affordable measures to reduce our province’s emissions and support Ontarians as they look to do their share in helping to protect and preserve the environment.”
Young people across the province will hold Yurek and Premier Doug Ford to their word.
In St. Thomas last week, Berry left no doubt.
“Real fundamental, systemic change will not happen unless we hit the streets and make ourselves heard.”
And, as Swedish climate activist Greta Thunberg vowed Friday in Montreal, “If the people in power won’t take their responsibility, then we will.”

Still with Yurek, on Thursday at the Elgin County Administration building, he announced the province is providing Alzheimer Society of Ontario with close to $600,000 for its Finding Your Way program.
Of that amount, $15,000 will be allocated to the St. Thomas-Elgin branch of the society, part of which will be used as an educational component.

According to the website at findingyourwayontario.ca, the program “helps people living with dementia, their families, caregivers and communities to recognize the risk of going missing, be prepared for incidents of going missing, and ensure that people with dementia can live safely in the community.”
It is estimated 240,000 individuals residing in Ontario are living with dementia and, of that total, 60 per cent will go missing at some point.
Yurek noted, “Every minute counts when a senior goes missing to help keep them safe . . . We are protecting what matters most to help seniors live independently in their communities.”
As to whether this was one-time-only funding for the program, Yurek indicated “It is for this year and then I think there will be conversations with Alzheimer Ontario to see if that program needs funding to continue or they need funding for something else.”
Yurek added the Finding Your Way Program “amplifies” an initiative launched by the St. Thomas Police Service last year.
The vulnerable persons’ registry records critical information about an individual and their specific needs, habits and contact information to help first responders locate a vulnerable person quickly.
The register is available to parents, guardians, administrators, substitute decision-makers or individuals concerned about their own situation.
More information on the registry can be found here.

Earlier this month we spoke with Adrienne Jefferson, the city’s Supervisor of Parks & Forestry, to get an update on the egg oiling program to control the Canada geese population in St. Thomas.
The call was prompted by an email from a reader wondering whether the program had proven to be too much of a deterrent as he had seen virtually none of the birds in city parks over the summer.
Deb Harris, a Lake Margaret resident and a staunch wildlife supporter, this week emailed us with her take on the Canada geese discourse.
“As a new resident to the Lake Margaret area, I was flummoxed. I was aware that some residents considered the geese a nuisance. But naysayers are always noticed above the silent majority as we all know the squeaky wheel gets the grease.
“So as I wandered through Lake Margaret during egg-laying season, I wondered where are these pesky geese? Yes, there were a few pairs on this quiet, warm day, but hardly the droves I was anticipating.
“The sidewalks were clean almost to the point of being pristine. I say that with disdain.
“Enough already, it’s time to share our space with other sentient beings. And if they are perceived as being overabundant, we know there are other ways to deter geese.
“It’s time to put an end to egg oiling or any other deterrents at this time.”
Oh boy. The feathers could be flying in the flap over egg oiling.

Reader Ann in St. Thomas has forwarded her thoughts on next month’s federal election and the lineup of candidates in Elgin-Middlesex-London riding.

“I realize that no one is going to defeat the Conservative candidate in EML and Karen does a fantastic job representing us. But for years I still voted Liberal but the blackface issues nixed that as a choice this time around.
“So I thought voting Green may send a signal that some of us in Elgin are aware of climate change and its effects on us. So I tried to find the Green Party candidate.
“It took three emails to (party leader Elizabeth) May and the GPC to get an answer. So we have a Green candidate named Ericha Hendel. Ericha is a parachute candidate who lost the nomination in Sudbury. She had no connection with EML. Does not live here, did not go to school in this area, etc. etc. She will not be getting my vote, even to make my statement.
Elections Canada needs to change the rules for federal candidates. Taking a page from municipal elections would be a good start.”

Today, as part of the Canada-wide Culture Days celebration, Railway City Tourism will officially unveil the four boxcar murals crafted by area artists at the former L&PS rail line at Moore and Talbot streets. The cars will be on site beginning at 9 a.m., with a special announcement to be made at 4:30 p.m. In addition, street artist Will Graham and a group of chalk art students will begin creating a masterpiece right on Moore Street starting at 9 a.m.

Also part of Culture Days, the St. Thomas-Elgin Public Art Centre this afternoon is hosting a reception with the artists of In View if the Artist. The free, family event runs from 1 to 3 p.m. and is sponsored by the Downtown Development Board.

founded whose aim is is to facilitate access of women to higher education and promote friendship and understanding among women throughout the world without regard to race, religion or political opinions. Guest speaker for the evening is St. Thomas native Nora Sanders, General Secretary of the United Church of Canada and a lawyer by training. She served in Nunavut as the Deputy Minister of Justice and in Saskatchewan as the Deputy Minister, First Nations and Metis Relations. Sanders will be speaking about the female influences in her life, including her mother, Mary Sanders, who was a charter member of CFUW St. Thomas. For more info, contact Meg Sloan at meg.sloan@rbc.com before Oct. 2.