If you think all is quiet on the St. Thomas Elevated Park front, all you have to do is look up to see nothing could be further from the truth.
The first of two large sculptures crafted by area artist and blacksmith Scott McKay was positioned in place this week, high above Sunset Drive in readiness for this year’s picnic on Aug. 27.
Entitled Fear Not The Wind, the artwork is an over-size, functional weathervane.
“Because it’s a windy environment up there, the artist came up with the idea of using that wind to make the sculpture move,” explained Serge Lavoie, president of On Track St. Thomas. “So, a big, overgrown weather vane was the answer. You go to old-fashioned gardens and they put in weather vanes or sun dials and he came up with a weather vane for this garden and I think it’s a cool idea.”

“You have to stand under it to really get the impact. It’s 20 feet high and the weather vane part is 14 feet wide. It’s half the width of the bridge, so when you’re standing under it, it really is a presence. You’ve got this swinging over your head silently.” 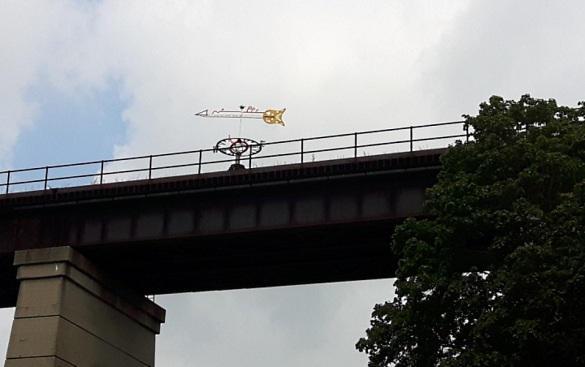 “The original intent was to pick up on the imagery associated with the railroad,” McKay told City Scope back in March. “And I find a bridge is a way people find to another place. That’s why I though having an indicator of some sort on the top would be appropriate.”
The sculpture was to have originally been situated at the half-way point along the length of the bridge, however Lavoie advised the location had to be altered.

“When we consulted with engineers, they wanted us to avoid any of the expansion joints. The bridge is built in sections . . . and they didn’t want the legs (of the sculpture) to go across any of the sections because of expansion through heat. So we had to make sure the sculpture was all on one plate of the bridge. So the next best site would be right over Sunset where people can’t miss it.”
The second sculpture will be installed within two to three weeks, advised Lavoie.
“We’re putting this structure in over by King Street, at the entrance to the park. It’s called Mixed Signals, and the theme on that one is railway signals. It looks like a collection of different kinds of railway signals – lights and crossed arms and things like that.”
“It will be 15 feet high,” McKay added. “It resembles more the signage and signalling associated with the railroad. It will be a 10-foot pole and the top five feet will be adorned with many different signals. I’m fabricating all the signals, I’m not re-using ones. I’m mimicking them if you will.  I’m using glass lenses in them and I want the light from behind to illuminate and not rely on an energy source.”
Lavoie had hoped half the wooden decking would be in place for next month’s picnic, however a considerable amount of re-engineering has taken place this spring. 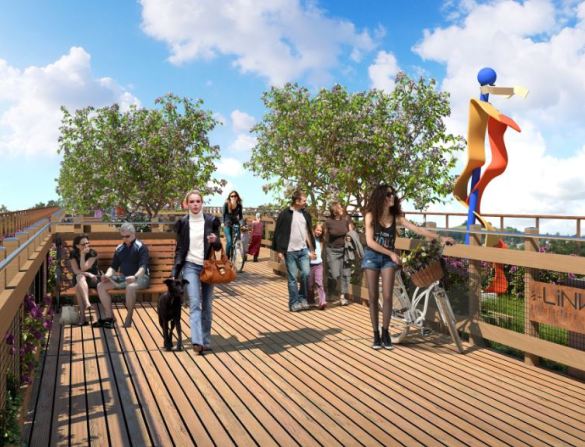 “That means we have to add fabrication time,” said Lavoie. “We got all the bids in last week and we’re just reviewing that now. So what we’re going to have for the picnic is the sculptures, the planters with trees in them and some benches but we’re not going to have the full decking and railing system in yet. That will go in later in the fall.
“The railings will be metal and we have to anchor the deck to the bridge using metal anchors and all the metal is welded to the bridge. And then the decking will be added on top of that.”
Also scheduled for this fall is the planting of a special wildflower meadow mix created specifically for the elevated park.
“We had a horticulturist devise a meadow mix just for us,” enthused Lavoie. “Plants that can handle that environment up there. There are about 30 different seed types going in, with a height from a couple of inches to three or four feet.
“They’re wildflowers with some grasses. But they will be grasses that also flower. We have to plant that after the first frost. And then it over-winters and in the spring it will be like a carpet of wildflowers wherever we don’t have the deck.”
Ticket sales for the picnic launched this week and are available at elevatedpark.ca.
“They’re $30 per ticket,” noted Lavoie, “with catering by James Meadows. There will be lots of picnic tables and it will be a nice, comfortable place to sit down and enjoy everything.”
After that, stressed Lavoie, it’s back to work on Canada’s first elevated park.
“As soon as the picnic is over the whole site goes back to being a work site and we get busy building the decking.”

APPROACHING 30
So, how’s that Sutherland Press building working out for ya?
With funds at his disposal and a determination last month from Justice Peter Hockin the building is truly unsafe, what has owner David McGee undertaken on site and how are talks proceeding with the city?
“Nothing substantial,” was the assessment Thursday from city manager Wendell Graves, who last month stressed, “In the absence of any action by the owner, the city will want to make the area safe again as soon as possible.”

At the end of June, we chatted with McGee’s lawyer Valerie M’Garry, who advised “We’re optimistic of approaching the municipality and saying here’s a proposal for you, let’s move forward rather than spending time on appeals and things like that.
“For the first time in a while, Mr. McGee does have some money at his disposal. But he has to be able to apply it judiciously and have some faith he doesn’t put it into a building that’s going to be a pile of rubble two days later.”
With the 30-day appeal period expiring next week, is the city content to settle for more hurry up and wait?
All of which prompted this post on Facebook from Susan Gerry: ” It pains me that this seems like a never-ending battle. Looking at the building now, there is nothing that can be said by Mc Gee that will ever convince me he will make this project a reality. Bring her down!”

After nine years, it’s time to pony up and listen

Thirty days and counting in the Sutherland Saga

‘It just sits there.’ Is the Sutherland Press building a monument to something or an over-sized bird house?

MOVING FORWARD ON CITY’S PAST
St. Thomas is transitioning from the conceptual to the planning stage as it moves toward creation of a Downtown Heritage Conservation District (HCD). City council Monday approved a $46,700 expenditure to Stantec Consulting Ltd., for a work plan to be completed before the end of the year. The plan will include a review “of the objectives, principles and policy framework” of the proposed heritage district, according to the report presented to council.

The district would stretch along the Talbot Street commercial core, between Queen and Alma streets, and include the railway lands on the south side of the thoroughfare.
The HCD draft proposal to be presented to council will offer guidelines and policies on: contributing heritage properties; non-contributing heritage properties; alterations, additions and new construction; demolition; landscaping; railway lands; open space and parkland; streetscape improvements; and public initiatives.
So, what would this mean for property owners in the proposed HCD?
“They would have to abide by guidelines for renovations,” explained Lashia Jones of Stantec Consulting in a presentation to council in March of this year. “Property owners would have to abide by maintenance standards established by the municipality through public input.”
Any new development would have to be “sympathetic” to the existing external style including height and density, added Jones.
Property owners undertaking renovations have the option of appealing to the Ontario Municipal Board if their plans conflict with heritage district guidelines, cautioned Jones.
However, she added, those appeals generally are less common.
At that same presentation, Graves stressed heritage conservation district designation would be limited to exterior features and not include interior amendments such as second floor meeting rooms and halls.

PEDAL POWER
In addition to council’s endorsement this week of a revised Cycling and Trails Master Plan – developed in conjunction with Elgin St. Thomas Public Health – St. Thomas is going after provincial funding to accelerate implementation of the plan. The city will apply to a new, four-year funding program for cycling infrastructure recently announced by the Ministry of Transportation.

In the past two years, more than six kilometres of cycle lanes and a one-km multi-use path have been created as the city works toward making cycling an attractive option for getting around St. Thomas.
Many of the proposed cycle routes from the plan will be implemented along with construction projects identified on the 10-year capital plan.
In his report to council this week, manager of capital works David Jackson noted these efforts by the city “along with other initiatives to promote cycling by partner organizations was recently recognized by the Share the Road Cycling Coalition with a Bicycle Friendly Community Bronze Award.”
The full plan can be found at cycle and trails master plan.