Did you check out the notice in your latest St. Thomas Energy bill? Seems like the utility merger with Entegrus out of Chatham-Kent is moving toward consummation early in the new year, with the new entity to be known as Entegrus Powerlines.
I guess when you only have a 20 per cent piece of the pie you don’t have any say in naming the beast.
And by coincidence, the merger is the subject of a report from city manager Wendell Graves on Monday’s council agenda.
It’s chock full of legalese and ratepayers have the right to a clear explanation of what is about to transpire on the eve of the merger.
More important, what are the long-term financial implications because this appears to be less a merger and more a fire sale.
So, we chatted with Graves on Friday as to what members of council are being asked to vote on as our elected representatives.
“It’s a really complex legal pathway,” admitted Graves. “But essentially what happens is that the companies in the Ascent Group all amalgamate together and then are all transferred to Entegrus on closure.
“So there are two amalgamations that take place, essentially. Internally with the Ascent stuff and then everything goes to Entegrus.”

Here’s where it gets a little sketchy. Specifically, the resolution reads the city will purchase all of the outstanding shares of Ascent Energy Services (which includes Ascent Utility Services, Ascent Solutions and Ascent Renewables) for nominal consideration and on a non-recourse basis.
So, when talking about nominal consideration, just how much is that?
“The dollar figures are all relative to the closing figures and the value of the companies, etc.,” responded Graves.
“The lawyers and accountants are looking after that side of the business.”
Does that give you clearer insight as to how much city ratepayers are doling out to purchase all of the outstanding shares of Ascent?
I didn’t think so.
Let’s try again with Mr. Graves. What is the value of these shares the city is purchasing from Ascent?
“There will be a number but it is a percentage ownership in the new company (following the merger with Entegrus).”
We already are aware of that percentage, it is in the 20 per cent range and would have been at least 30 per cent or more except for the long-term debt of St. Thomas Energy/Ascent, estimated in excess of $20 million. And don’t forget the more than $5 million still owing the city for water bill collection.
Graves did acknowledge this negatively impacts the ownership percentage.
“That all gets rolled into the financial documents and carries forward in terms of the ownership percentage the city will have in Entegrus.”

As mentioned earlier, 20 per cent is not a big slice of the pie is it?
So what about that long-term debt. You can bet the residents of Chatham-Kent are not about to pick up the tab.
“Both sides are looking after their own liabilities,” confirmed Graves. “Each is responsible for anything before the actual merger takes place.”
So, city ratepayers are ultimately responsible for that long-term debt. How will this be rationalized.
“It’s all part of the financial equation,” noted Graves, “that lands us at our 20 per cent stake in Entegrus.”
But you can’t just write off nearly $30 million in debt the city is responsible for as a pre-merger liability.
How is that going to be dealt with? Is it going to be tacked on to our monthly energy bill, in the same manner the province undertook to pay down long-term debt?
“I want to simplify that for you, so why don’t I ask the question and I will get back to you on that. I don’t want to lead anybody down the wrong rabbit path.”
Don’t you think that question should have been asked a long time ago? Or is the answer already known and is so tainted no one wants to broach the subject.
Could make for good election fodder next year.

City council gives green light to St. Thomas Energy merger; we remain in the dark on status of debt

A ROUNDABOUT WITH FLAIR

It’s entitled Perseverance – a tribute to the city’s long and colourful railway past – and the process of designing, crafting and placing the artwork in its permanent home as the centrepiece of the Gateway Roundabout required no shortage of that attribute. 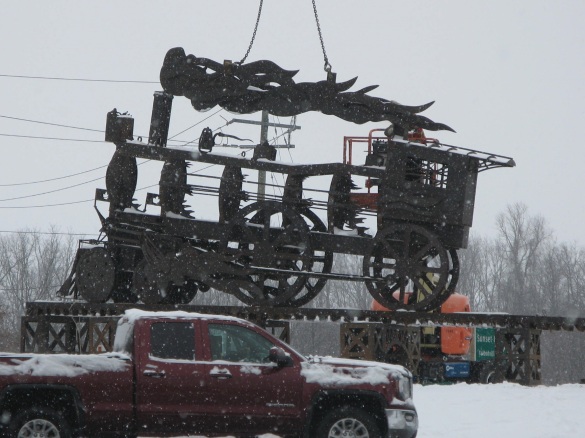 Comprised of a steam locomotive and tender, a passenger car and a caboose, Scott McKay’s large-as-life sculpture is nearly 20 metres long and 6 metres tall at its highest point and will provide a stunning introduction to the western reaches of St. Thomas.
The soaring train sculpture – approved by city council on May 15 of this year – was created from 25 tonnes of corrosion-resistant Corten steel, at a cost of $186,000.
When lending his support to the undertaking, Coun. Gary Clarke observed, “This is an investment well worth making. It is maintenance free and progressive. A signature piece of artwork.”
McKay was seated in the council chamber for the vote that May evening.
“I was very thrilled. It looked good on paper in the agenda. But you never know what’s going to happen. You’ve got different people (on council) with different ideas so you just never know what’s going to happen. I’m glad it worked out well.”

McKay, who works out of his Strong Arm Forge in Lawrence Station, considers the work – his largest to date – not so much as art, but instead as big, heavy and muscular statements.
“As far as an art project, absolutely,” advised McKay. “These big art projects need to be treated as a construction project.”
Although the sculpture incorporates a steam engine as a nod to the city’s railway heritage, McKay stressed this work is about looking down the line at the future.
“It’s important to embrace the history, but it’s also important to look to the future. To look at St. Thomas as a cultural element too, not just tied in as the industrial past.”
Ironically, two other pieces of McKay’s colourful art were placed this summer atop the St. Thomas Elevated Park, within sight of his roundabout installation.
Enduring blowing snow and frigid temperatures during assembly of the sculpture Friday (Dec. 15) – exactly seven months to the day he got the green light from council – was a case of deja-vu for McKay.
“I used to work in Yellowknife, there’s no bad weather down here. Snow doesn’t matter. The foundations will be in. I will be working above ground.” 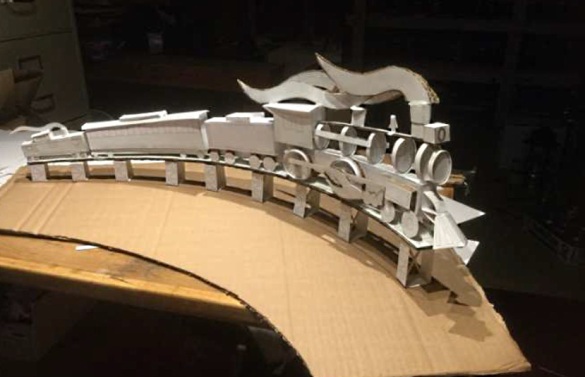 logo – Sean Dyke, general manager St. Thomas Economic Development Corporation – pointed out the Western Gateway roundabout will provide “visitors to the Railway City with a welcoming approach that features the new sculpture and the new branding attractively displayed on the feature wall, with a parking area designed specifically for viewing and enjoying the public art.”

St. Thomas developer states the obvious – you’ve got to have people downtown

Now that it is but a memory, have you marvelled at how small the footprint is for the former Sutherland Press building? Over the past decade the four-storey structure seemed to cast a pall over the entire downtown core. 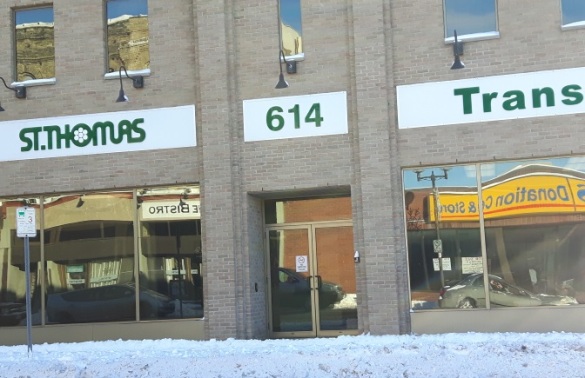 For motorists and long-suffering transit users, it’s a return to normal along that stretch of Talbot Street.
Moore Street running south to the municipal parking lot is open again as will be the transit terminal effective Monday (Dec. 18).
Have we finally rid the city of the McGee virus?

Want to keep abreast on the status of plowing, sanding and salting of roads and sidewalks in the city?
Well, the city has set up a web page to update the snow removal/clearing efforts during major events this winter.

Check the city’s website for regular updates
If the weather prognosticators are accurate and we’re in for a good old-fashioned Canadian winter, then it would be wise to bookmark this site.

We’re hearing the highest polling councillor in the 2014 municipal election intends to make a bid for the mayor’s seat in next fall’s vote.
Would that not mean stepping out of the classroom if successful?
Will Mayor Heather Jackson accept the challenge? Will this strictly be a two-horse race or are other hopefuls willing to toss their hat in the ring?
And what’s this we hear about one or two former denizens of the council chambers toying with a ride on the comeback trail?
Nothing like a good election dust-up to get the adrenalin pumping.

There is a real divide on council over community grants. Councillors Steve Wookey, Joan Rymal, Mark Tinlin and Mark Burgess are seeking to cap the amount doled out to any one group or organization at $60,000 per year. That would negatively impact the Talbot Teen Centre and the St. Thomas Elgin Public Art Centre.
Mayor Jackson is vehemently opposed to the upper ceiling but appears to be outnumbered come vote time, scheduled for Monday’s council meeting.
Coun. Rymal summed up the prevailing sentiment when she observed, “Our role is to preserve the financial integrity of the community.”