We live today in a house so divided.

However, yesterday (Friday) over the noon hour at city hall, a hundred or so individuals were able to cast aside their differences and unite in what the colour orange represents.
The sea of orange gathered to commemorate National Day for Truth and Reconciliation and Orange Shirt Day.
A day to remember but equally important to learn.
To learn what we were never taught in school.
The dark chapter in this country’s history.
A chapter finally seeing the light of day as a result of hundreds and ultimately thousands of unmarked graves of young children.
Young Indigenous children, the victims of cultural genocide.
Students snapped from their homes and shuffled off to residential schools where their identities were erased.
The last of which closed as recently as 1996.

It’s a story that tears at the heart. But years later finally begins to uncover the cruel legacy of the residential school system in Canada.
Yesterday’s event organizer Betty Jean Phillips Budden explained the use of an orange shirt as a symbol was inspired by accounts of Phyllis Webstad. 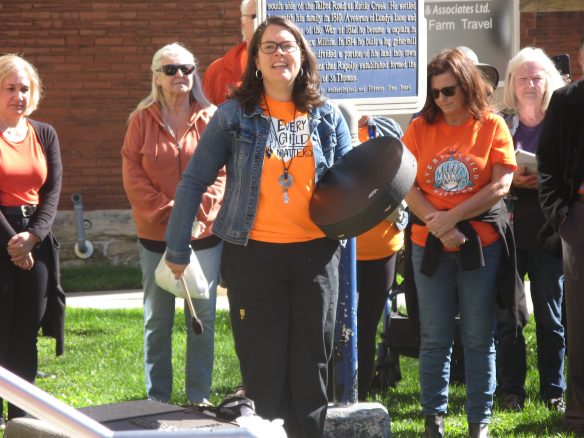 “A woman who was forced to go to the residential school in Kamloops. She tells the story of how her grandmother bought her an orange shirt she was wearing on her first day at the school.
“And, they took it from her and made her wear a uniform and she never saw that shirt again.
“And she felt as if what she wanted did not matter.”
Budden advised the phrase Every Child Matters is a symbol of stripping away the culture, freedom and self-esteem experienced by Indigenous children.
And, the wearing of an orange shirt is appropriate any day of the year, not just Sept. 30.
“So instead of asking why are we still talking about this, you should be asking why aren’t more people talking about this.
“And, how can you support, not only the survivors who are still around today but also the communities that are affected by inter-generational trauma?”

In total, there were 140 federally run residential schools in Canada that operated between 1867 and 1996.
One of them is Mount Elgin Indian Residential School near Muncey at Chippewas of the Thames First Nation.
This corner wrote about that school 10 years ago and you can find a link to that post below.
About 30 minutes from St. Thomas at Oneida Nation of the Thames, residents cannot drink the water without boiling it.
The same story is in two neighbouring Indigenous communities.
In 2022 they don’t have safe drinking water and it has been that way for several years.
Budden continued, “One of our healthcare rights, not just for Indigenous Peoples, but for every human being is the right to clean water.

“As of yesterday, there are 28 reserves with long-term boil water advisories across Canada. And 20 of those reserves with long-term boil water advisories are in Ontario.
“Including my reserve, my band where my family is from. Where my grandmothers lived is Oneida of the Thames. I still have family who live on Oneida. I have cousins who live there.
“And, for over four years now they have not had clean drinking water. For over four years they’ve had a boil water advisory.
“One of my cousins told me she bathes in rainwater. They have a rain barrel that they collect rainwater to bathe in because the water out of their taps is unsafe.”
In 2022, a half-hour distant from St. Thomas.
Budden held up a container of water and encouraged anyone present to take a drink. One brave soul said he would but did not come forward.
Budden warned if you dare drink the water, you better remain close to a washroom. You will need it.
Based on the findings of the Truth and Reconciliation Commission of Canada, Budden proposed a call to action for those in attendance.
“See if one of these calls to action (in the commission report) touches your heart and, if it does, call your MP, call your MPP, call the federal government, send emails, write letters, not once, not twice but as many times as it takes until every single one of these 94 calls to action is fulfilled, completed.
You can find a link to those 94 calls to action from the Truth and Reconciliation Commission here.
A consensus is anywhere from 11 to 17 of those calls to action have been fulfilled.
Budden closed her presentation with a request.
“I want the city and the churches of St. Thomas to recognize our inter-generational trauma and our people.
“And I want them to acknowledge that we are here.”

Support is available for anyone affected by the traumatic legacy of residential schools and those who are triggered by the latest reports and recoveries. The Indian Residential School Survivors Society (IRSSS) can be contacted toll-free at 1-800-721-0066. A national Indian Residential School Crisis Line has been set up to provide support for former students and those affected. People can access emotional and crisis referral services by calling the 24-hour national crisis line: 1-866-925-441.

Closing a sordid chapter in the history of Canada

Gary Clarke is one of six St. Thomas councillors seeking re-election and if successful on Oct. 24, he will be sitting for his third term.
As in his two previous campaigns, infrastructure renewal and affordable housing continue to be key elements of his platform. 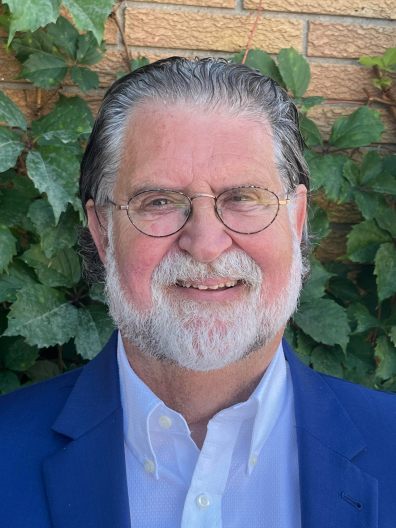 But this time around, add an addiction treatment centre to his priorities.
“For citizens of St. Thomas not to have a treatment centre in St. Thomas or for Elgin county people to have to go on to a waiting list to go to London when they’re not supported locally with their friends and loved ones, for me that’s a top priority.”
In a similar vein, Clarke argues there is an overwhelming need to get an end-of-life hospice up and running.
A location has been selected on city-owned land adjacent to Msgr. Morrison Catholic School but little has transpired of late.
“We’ve been a long time trying to get the St. Thomas-Elgin hospice built.
“We’ve made good progress, the city has donated the land and the pandemic stalled things a little bit.
“It’s another priority we’ve started that we need to get completed. It’s a matter of respect for families. It’s another important one for me.”
Caught in an inflationary spiral right now, Clark cautions the new council will have to be sensitive to significant increases in property taxes while ratepayers wrestle with stressed-out budgets.
“We’ve tried to do a lot with providing these goods and services to folks, but I think we have to be cognizant of what people can afford.
“So I think tax increases below the inflation rate are going to be important, at least in the short term of the new council looking at its first budget.”

“One thing I think we also need is a climate change, green energy master plan. I think what we can do there is focus on how do we decrease our greenhouse gas emissions and how do we get our energy consumption down and then increase our ability to generate some renewable energy.”

With homelessness and affordable housing hot-button issues with many voters, Clark points out that progress has been made over the term of this council.
“People have to realize we do have a plan and we’re working through that plan.
“We built the micro-units (the 16 units above the downtown transit centre known as Railway City Lofts).
“We do have a shelter (The Inn which replaced the seasonal shelter, Inn Out of the Cold).
“And, part of it is timing. We’ve got a new building (at 16 Queen Street) that’s going to have 45 units down in the west end and that is going to be supportive (housing).
“So that’s going to be 45 more people that will be off the street and in housing.”
One area that has received little attention this election is energy resources.
“One thing I think we also need is a climate change, green energy master plan.
“I think what we can do there is focus on how do we decrease our greenhouse gas emissions and how do we get our energy consumption down and then increase our ability to generate some renewable energy.”
Part of that focus during this term was upgrading the transit system with an eye to a fully electric fleet of buses.
Unfortunately, the availability of vehicles of a size needed for the city has held back progress on that front.
And then there’s the issue of land available to attract new industries to St. Thomas, although the process of acquiring 800 or so acres of farmland in the northeast quadrant of the city will begin to address that shortage.
“We’re running out of land,” points out Clarke. “We’re running out of space where companies can take over an abandoned building. They’re all full.
“We need to start looking at new sites.”
Looking back at the 2018 election results, Clarke finished third with 5,032 votes, behind Steve Peters and Jeff Kohler.

You can hear the full interview with Gary Clarke here.

WIDER ROADS ON THE WAY

Based on the findings in the 2021 Transportation Master Plan, both Highbury Avenue south of Ron McNeil Line and South Edgeware Road are pegged for road widening improvements. 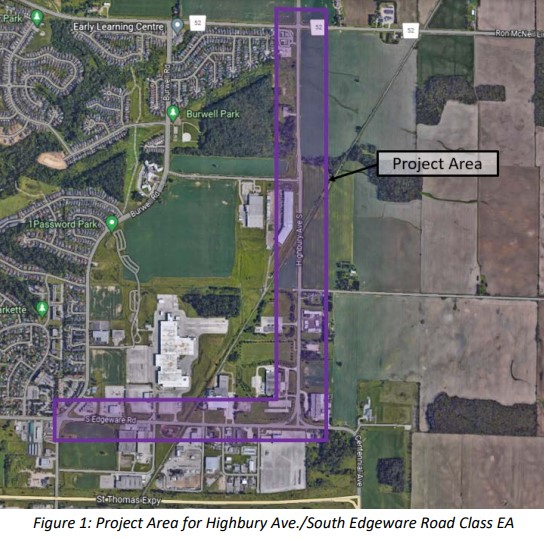 The process will begin Monday evening if council approves awarding a tender to R.V. Anderson Associates of London to conduct a required environmental assessment. The value of the contract is just shy of $300,000.
The firm has been involved with similar projects in St. Thomas and neighbouring municipalities.
The public portion of Monday’s meeting begins at 5 p.m. in the council chamber at city hall.

Haven’t seen them on the program yet and I may have missed them, but can we expect mayoral candidates Heather Jackson and Gregg McCart to be profiled on Establish Media’s Mayor’s Corner? In light of the municipal vote in just three weeks.

The St. Thomas & District Chamber of Commerce is hosting a municipal candidate meet and greet from 4:30 until 7 p.m. on Wednesday at the CASO station.
All candidates from St. Thomas, Central Elgin and Southwold are invited to participate.
Admission is free.