The city’s incoming municipal council will be sworn in Monday and, prior to that, members will undergo an orientation and training session today in the council chamber at city hall.
It is an opportunity for the newcomers to gain an introduction to the city’s procedural bylaws and code of conduct . . . matters of protocol several out-going members apparently did not familiarize themselves with.
Picking up on our discussion last week with Mayor Heather Jackson, we asked her about the city’s relationship with neighbouring municipalities — not always of a harmonious nature in areas like tourism promotion and marketing.
“We have work with our neighbours and we have to work with the county,” stressed Jackson. “Let’s get a liaison meeting set up early in the new year. I want their new council to get to know our new council . . . so we can continue to build a relationship.
END_OF_DOCUMENT_TOKEN_TO_BE_REPLACED

The city has been relatively coy of late on whether it will continue its participation – and to what extent – in Elgin county’s tourism program.
In 2013, the city’s share of the tourism budget is almost $122,000 and more than once in the last couple of years there have been suggestions the city go it alone in the marketing and promotion of tourist-related opportunities.
Well the wraps are about to be thrown off the new tourism model at Monday’s council meeting.
CAO Wendell Graves suggests with an upcoming strategic review of the St. Thomas Economic Development Corporation, it would make sense to deal with many of the tourism-related ventures as economic development opportunities.
END_OF_DOCUMENT_TOKEN_TO_BE_REPLACED

After decades of dawdling, similar in process to the consoldiated courthouse project finally underway, an open house will be held 5 p.m. Wednesday at city hall to unveil plans and cost of the new police headquarters.
The long-awaited home of the police service is to located on city-owned land adjacent to the Timken Centre.
Ald. Dave Warden, chairman of the new building committee, says it’s an occasion to not only inform ratepayers, but demonstrate “the transparency of everything that’s going on,” and attach a price tag to the project.
Warden continues: “We’ll lay to rest all the rumours and everything else there is about the police building. We’ll have the actual cost.”
Nowhere near the $30 million sticker price being promoted by one member of council.
END_OF_DOCUMENT_TOKEN_TO_BE_REPLACED

The following was forwarded to City Scope by St. Thomas resident Bev Walpole and illustrates the “outside-of-the-box” thinking so sorely lacking today. It’s a case of addressing a large-scale national issue with a made-in-St.Thomas solution.Please take a few moments to read Bev’s paper and feel free to comment. This is certainly far removed from the initiatives currently being floated by local politicians and business development groups . . .

From 1978-1985 I was a public health inspector working for the federal department then known as Health and Welfare Canada, Medical Services Branch. My duties included advising Inuit and First Nations communities about sanitation and environmental issues. My work took me throughout the Northwest Territories, part of what is now Nunavut, Northern Saskatchewan and the province of Manitoba. During those years I encountered problems in those communities such as inadequate housing, inadequate and improper disposal of sewage, unsafe water supplies and the myriad of social issues endured by the citizens of those communities.

Throughout those years, I did my best to advocate for more and better housing, clean, safe water supplies and safe disposal of sewage and household wastes. I approached my own department as well as the Department of Indian affairs on behalf of the communities. I encouraged the leaders of the community to work towards improvement of conditions on their reserves and villages. The response from the community leaders was to ask where the money would come from to improve their situation. The Federal government departments for whom I worked and to whom I advocated on behalf of the communities responded with excuses such as “there is no money; resources are limited; and they’ll only wreck it anyway.” It was frustrating to visit these isolated communities, each time reporting on conditions and submitting recommendations for improvement and realizing that probably nothing would be done to make the situation better. I recall mentioning to a friend that if the temperature was to increase in the northern communities, disease would spread like wildfire because of the improper disposal of human waste, and the consumption of untreated or improperly treated water supplies.
END_OF_DOCUMENT_TOKEN_TO_BE_REPLACED

The St. Thomas-Elgin General Hospital board of governors today (Oct. 12) signed CEO Paul Collins to a five-year contract. City Scope will offer comment Saturday. In the meantime here is the release in its entirety from the hospital. Note: the board of governors took great pains to advise Collins will remain at last year’s salary. What the board did not come clean on is the fact his salary will be reviewed next year … 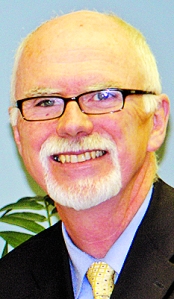 Collins’ salary remains the same as last year. The hospital is paying his salary but has not, and will not, contribute to a pension fund or any other investment fund subsequent to his employment status change in June 2010. This arrangement is saving money for the hospital. Terms state this is the final employment agreement that will be negotiated with Collins.
END_OF_DOCUMENT_TOKEN_TO_BE_REPLACED

Today’s announcement signals that all contractual steps are complete, the financing set and construction can begin.

Construction will start in April 2011 and is expected to be completed December 2014. The project, which will include the construction of the two facilities totalling 689,700 square feet of new space, will provide
stimulus to the local and regional economies by creating construction jobs and supporting spin-off activity.
END_OF_DOCUMENT_TOKEN_TO_BE_REPLACED

Upon her election in October, Mayor Heather Jackson-Chapman made it clear a priority would be a harmonious relationship between the city and Elgin county.

That will be put to the test Monday when a county delegation appears before city council with the expectation of St. Thomas ponying up $118,000 this year (up from $89,000 last year) to remain in a tourism partnership with Elgin.

At the very minimum, the county is demanding $99,000, and for that piddling amount the city’s voice in the partnership would be reduced from two to a single representative.
END_OF_DOCUMENT_TOKEN_TO_BE_REPLACED